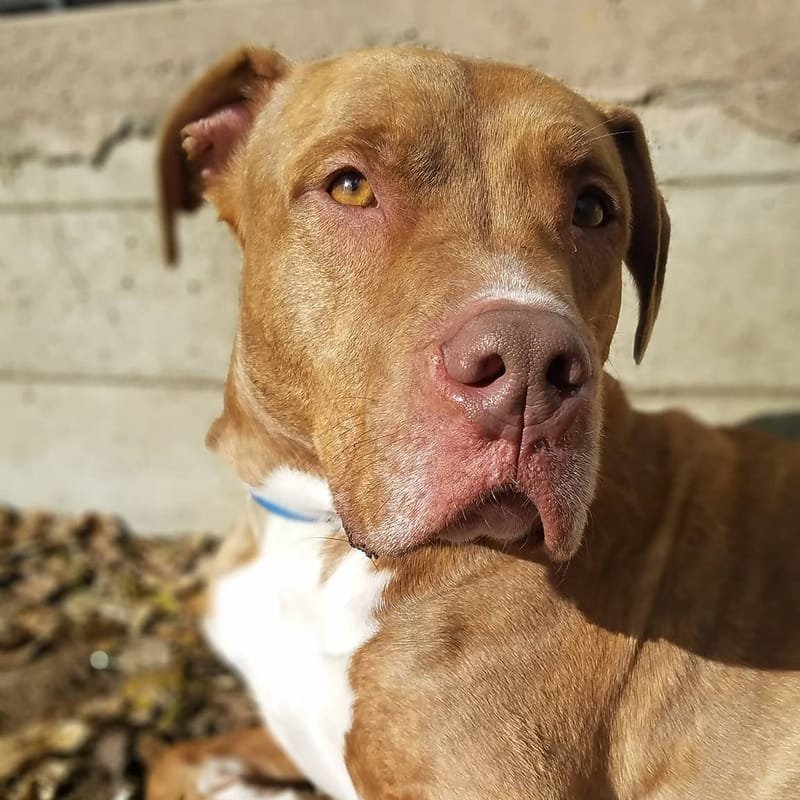 Buster Brown is the reason Buster’s Paw Prints exists! Buster first came into Tehama County Animal Care Center in April 2014 after he had been hit by a car. After having a rear leg amputated he was adopted. Unfortunately the next few years of his life were unstable and he ended up back in the shelter several times. He was always a staff a volunteer favorite with his huge smile.

Shelter life was hard on him as he lingered and he deteriorated quickly. In February 2018 our friends at Copper’s Dream rescued him and took him to the Bay Area. He eventually needed surgery on his remaining rear leg and I saw the foster plea. Though I already had four dogs, I offered to try fostering him and see how he fit in.

It was love at first sight. Buster fit right into the family and was so excited to be reunited with one of his favorite shelter employees. He loved being part of a family and his pink plaid blanket that he always had with him.

He eventually got a wheelchair which allowed him to participate in pack walks (and run over his mom’s feet every chance he got). There is something about a three legged dog in a wheelchair that catches folks eyes. Every person he met loved him… and he loved them right back.

Out of nowhere an adoption application came in and I was faced with the decision to adopt him or send him off to a new family. After a couple of days of back and forth, we knew he was meant to be with us.  A couple of months later, we started noticing some health concerns and took him in for a more detailed check up and testing. And then more testing. Eventually we were at the vet several times a month, changing medications, eliminating foods, and trying to get to the bottom of his health concerns. He was losing weight and sleeping more and just not quite himself.

On April 16, 2019 my sweet boy crossed the Rainbow Bridge. He had been through so much in his 5 years, his body couldn’t handle the issues. He was absolutely taken too soon and shattered my heart. I decided I wanted to do something every year on ‘Buster Brown Day’ in honor of my boy’s life. Eventually that grew into Buster’s Paw Prints, which we hope can help more dogs like Buster!